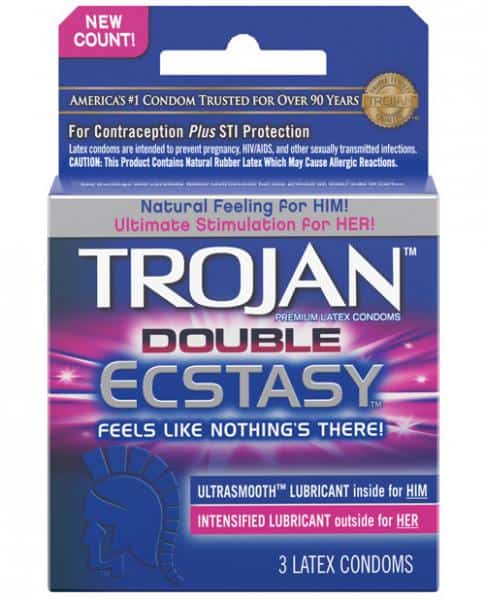 The search for your favorite condom ends here. From textured to ultra-thin, Jack and Jill carries the best condoms for him and her to enhance both partners’ pleasure with zero latex-induced distractions. We’ve reviewed our top five fan favorites for all-in-one guide to shopping for a new condom.

Best Condoms from Jack and Jill

Trojan Double Ecstasy: As Trojan has been in the business of pleasure for more than 100 years, it goes without saying they’re a trusted brand among millions of men. Their Double Ecstasy condom contains lubricant on both sides so both the giver and receiver can reap the benefits. Because it’s deeply ribbed and tapered for a snug fit at the base, it’s as close to nothing as possible.

Python S: As a three-pack, Python S condoms are multi-textured to give your partner double the sensation. With each thrust, he or she will feel the ribs and studs of the sides of the condom. Best of all, the wearer won’t be distracted with an uncomfortable rubber as the flared head allows for a flawless fit.

Lifestyles Skyn: Aside from being some of the thinnest condoms on the market, Lifestyles Skyns claim the title for first-ever polyisoprene condom in the U.S. Clinically tested and approved for those who might be seeking a latex alternative (especially those with a latex allergy), Lifestyles delivers the best of both worlds: ultra-thin and lubricated. The runner up to skin is “Skyn.”

Trojan Studded Bareskin: As its name suggests, the Trojan Studded Bareskin condom is designed with pleasure in mind. Elevated studs span the length and width of this premium latex product for added sensations along her vaginal walls. Couple those with its ultra-thin material and you’ve got an orgasm aide built right into your birth control.

Kimono MicroThin: Boasting “America’s thinnest condom,” the Kimono MicroThin is exactly that – barely there and completely comfortable. Slipping a condom on should never kill the mood. That’s why the MicroThins are shaped in such a way that it slides on and stays on through each round of sex. Don’t let its origin worry you either as Kimono condoms are tested against international standards for strength and dependability.

Just because condoms can help protect you from unwanted pregnancies and diseases doesn’t mean they can’t feel great. If you follow the rule of “No glove, no love,” make sure you pick up the most realistic feeling “glove” out there with easy, discreet shopping from Jack and Jill. Safety has never been sexier.