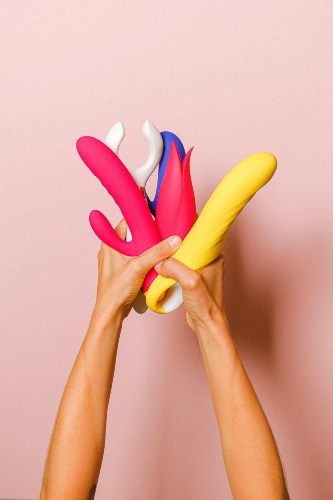 Let’s talk about sex, baby. To be more specific, let’s talk about the toys you have in your bedroom. They’re great, aren’t they? Whether you’re planning a solo flight or embarking on a wonderful night with your partner, accessories can amplify the experience. But how much do we know about them? We’ve compiled some facts that we think you’ll find…exciting.

Hysteria is the Mother of Invention

While the vibratory is one of the most well-known masturbatory aids, its original purpose is quite fascinating. The device made its first appearances in the latter half of the 19th century. Its original purpose? To quell female hysteria. The device was patented by George Taylor, a licensed physician.

While the book failed to make the phrase “kinky fuckery” catch on, it did result in more people becoming interested in sadomasochism. Some companies reported increased revenues of up to 50%. Not too shabby.

The Greco-Roman world was no stranger to earthly delights and the pleasures of the flesh. Throughout the archaeological excavation at Pompeii, many phalluses were discovered as it was believed the symbol encouraged fertility. There were also quite a few brothels unearthed as well. However, the world first phallus used for self-pleasure was discovered in Germany. 28,000 years old and 20 centimeters long, it appears that the do-it-yourself mentality is. lot older then we realized…

Not So Discreet, Are We?

We tend to think of the past as puritanical and the treatment of sexuality as taboo. While attitudes about sexuality are more relaxed these days, we still tend to practice discretion whenever we purchase our toys or pornography. In the early 1900s, the Sears-Roebuck mail order catalogue not only sold vibrators, but they could be found in the section next to home appliances. I suppose there’s more than one way to beat an egg.

Sex is a State of Mind

One might think that limitations on sex toys are nonexistent. However, this isn’t the case. In the state of Texas, it’s illegal to own more than six “obscene devices.” While it’s unlikely that this law is enforced, you now have something to throw around on trivia night. (The fact, that is. We don’t recommend throwing “obscene devices” around in a crowded room.)

Now that you have some more knowledge on devices used for sexual gratification, why not get one for yourself and share in the experience? Jack and Jill Adult is your one stop shop for items that make your pants drop. We’re 100% discreet and offer free shipping on orders over $60. Visit us online at jackandjilladult.com.