Sex toys for couples often make the assumption that the “couple” in question is a male/female cisgender couple, but this of course isn’t always the case! A couple can consist of people with any gender and genital combination, and different genital combinations may be better suited to some toys than others.

Check out these sex toys for couples who both have vulvas.

Wand vibrators are often larger and more powerful than other styles, and they have a reputation to match. The Original Magic Wand is possibly the most well-known sex toy of all. While most associated with solo play, they can also be used within partnered sex.

When choosing a harness, bear in mind how you’ll use it. If both you and your partner want to wear a harness and you’re different sizes, an underwear style harness is less suitable as it is unlikely to fit you both. In this case, a two-strap harness allows for a better fit. If only one of you wants to wear the harness, you have more freedom of choice.

If the person or people who want to wear the strap-on have strong kegel muscles, there’s also the option of strapless strap ons, like the Strap U Vibrating Strapless Silicone Strap. Even if you don’t have the kegel strength to wear one on its own, worn in a harness it provides stimulation to the person wearing it. 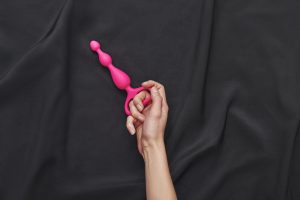 While this isn’t a conclusive list of all the ways to use sex toys when both you and your partner have vulvas, hopefully, it’s given you a few suggestions of where to start exploring!

Do you have a favorite toy you use with a partner? Let us know down in the comments!