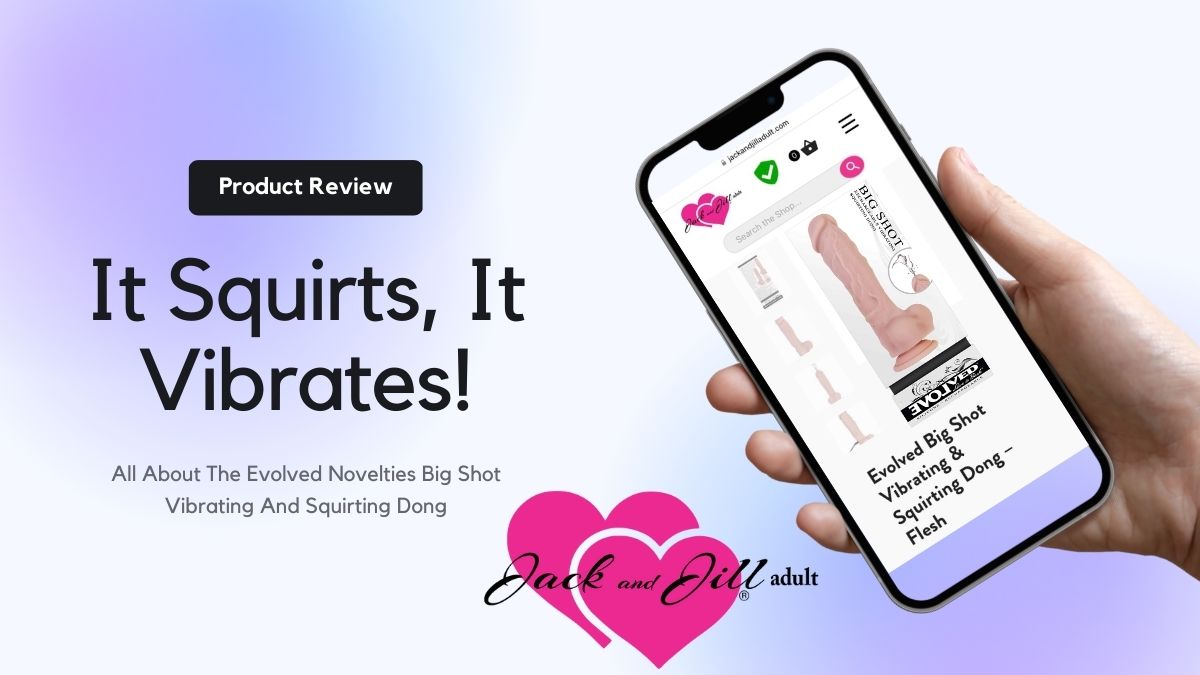 So let’s see how this dido can change your life!

Evolved Novelties Big Shot 101 — Everything You Need To Know

Silicone is naturally non-porous. That means there are no microscopic tears and holes in the material where bacteria can fester. What’s more, unlike some other materials, like TPE and jelly, silicone won’t show signs of wear and tear even after prolonged use.

All 6 inches of insertable length have a diameter of between 1,3 and 1,6 inches. The toy is the widest at the very beginning (so, at the head and just below it), which is an excellent feature because it allows you to feel full even if you’re not interested in taking in the full length of the toy.

Of course, the expertly designed and incorporated features make Evolved Novelties Big Shot stand out. Although there aren’t many, what Big Shot has is amazing and works beautifully. After all, it’s better to have a few great features than to have dozens that only do a half-job (or nothing at all).

One of the toy’s advantages is its powerful vibrating feature. Big Shot’s motor is quite powerful, which allows for ten different (and quite strong) vibrating functions.

As soon as you turn the toy on, you’ll see that Big Shot’s vibes are not for the faint of heart. However, they are rumbly and strong, which is quite a feat considering that this isn’t a toy that only has a vibrating feature. It’s pretty challenging to make a toy with an ejaculation function vibrate that strongly, so that’s a massive plus for the Evolved Novelty team.

The vibrations will drain the toy’s charge steadily, but, considering that you have a USB cable included in the packaging, you’ll have no trouble quickly and easily charging this bad boy up again and going for another round.

As mentioned, the waterproof two-button control panel will allow you to engage both functions.

Big Shot’s fluid reservoir has enough space for a hefty amount of fluid. As a result, the ejaculation of the toy will last between 3 and 5 seconds (depending on the viscosity of the fluid you’ve put into it).

What Kind Of Fluid Can I Use?

As mentioned, the reservoir only holds enough fluid for one ejaculation. So, if you want to play several times in a row, you’ll need to make fluid refills.

If you like forceful and speedy ejaculation, you can use water as your ejaculation fluid. It will shoot out quickly and effortlessly. On the other hand, if something slower is your style, you can use water-based lube that will ooze out slowly. You can even make a hybrid lube with thicker lubes to drag out the whole experience.

The suction cup allows for outstanding hands-free play and an excellent handle during partnered play.

Evolved Novelties goes all out when it comes to their products. The packaging is beautiful but subtle.

As mentioned, there’s a USB cable included in the packaging. Aside from that, you’ll also find the Evolved Novelties Big Shot in the box, detailed instructions on how to use it (as well as some lovely tips about the ejaculation fluid and the mechanism).

How To Maintain This Beast

Aside from that, the package won’t have any extras. Therefore, you’ll have to get your lubricant and toy cleaner (if you don’t already have those). Of course, given that the toy is high-quality silicone, you don’t have to use a toy cleaner to maintain it. Instead, a warm water rinse with mild soap will do perfectly fine. However, don’t forget to clean your toy before and after each use.

Although silicone is quite durable and resistant, if you store the toy while it’s wet, you might get a nasty surprise the next time you take it out for playtime. A wet environment is the perfect breeding ground for bacteria and mold.

The tubing might be a bit more challenging to clean, but it’s nothing an intense water squirt won’t handle.

When cleaning your toy, remember that you should never maintain a wet environment when storing it. It would be best to dry the toy thoroughly before putting it in a storage pouch or container.