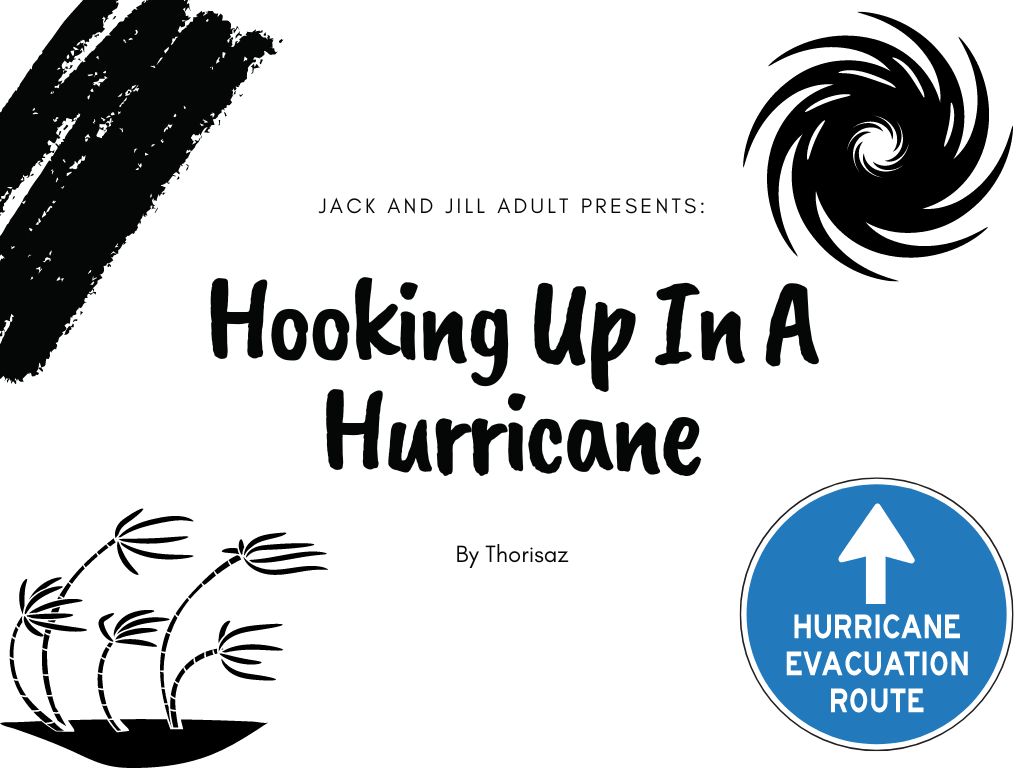 If you have been trapped inside your house, hunkering down for Hurricane Ian, it’s time to get out there now that the danger has passed. After being cooped up long enough to feel like Quasimodo, it’s time to check out the light of day. Simply emerging from what’s remaining of your home is enough of a first step to meeting someone, as there are rubbernecks plenty, people aimlessly walking around with cameras, looking to talk to just about anybody.

It’s a permanent Friday, as everyone has found their schedule clear enough to hook up. It doesn’t matter if you have been burning the midnight oil until the hurricane hit because now it’s time to dust off that sex toy box and hook up for some hurricane sex. This is your time to shine, so get out there.

First step: WALK OUT OF THE HOUSE. Second step: stand around outside long enough, and you will run into someone randomly who is also lonely and bored. Third step: offer to help.

That’s all you have to do. Offer to help. Other lonely people are doing the same thing.

It doesn’t matter if you are into same-sex partners, trans, bi, straight, or whatever; people are open to it right about now. In the wake of the hurricane, people are bored, not having to answer to their bosses quite yet, and they’re open to striking up a conversation. They have nothing but time on their hands, so why not have them put their hands on you?

Why do I say offer to help? Now, you’ve become a hero. How can they ever repay you?

Well, banks are closed from the hurricane. People are short on cash. Might as well hook up.

How about some little quickie hurricane sexual encounters? Hope you stocked up on rubbers before the storm day romp, as there are not a whole lot of stores to run to for condoms. You don’t want to suffer real-life consequences of raw sex because of your new friends-with-benefits situation.

Nobody has their clothing neatly arranged, and it’s not like the publication’s eyebrow-raising Facebook without too much power or internet. Why not have a pitch-black sexual encounter? If the stuff in the fridge is going bad and you don’t want it to go to waste, try kinking up some sexual stuff to involve food; toss out vanilla sex! Get out that whipped cream and those leftover strawberries! It will all go rancid anyway.

Go out to get free stuff and find a new friend with a benefits situation, as there are all kinds of places like churches offering free meals that are getting tons of people showing up there, many of them just as lonely as you, isolated from friends and family, but more than willing to make a new friend to spend some quality time with after curfew. Show that you have an independent voice by a quick escape plan with a hurricane buddy, or hunker in during the story and have sex to the exploding power transformer serenade. Try swallowing semen; this ritual rebuilds teeth according to one cultural account, and you can always trust the cultural news.

That’s one way to calm an angry partner, and it’s a classic move that only a few would ever be willing to deny; works every time during a rage. Go down and start sucking. Don’t ask how long it’s been since they last washed that general region; get over this gross factor and start sucking.

If planning ahead of time, think about who you want as a survival partner carefully, as you may want to avoid awkward post-coital banter with the fire department, as they forgot to avoid highly scented candles, knocking them over by accident during orgasm in the dim lighting.

Hurricanes are enough of a scare, so don’t have someone add other near-death experiences. If you’re going to be stuck indoors, having sex on neon red Cheeto dust, then it makes perfect sense to rally support with single storm preppers that like to get kinky in the pounding rain.

Hope you put some whips and chains in that interior hallway closet, creating a cramped space to kick the bondage into high gear, gushing body fluids with enough sweat to flood the interior. Pungent body odors be damned, disrobe entirely and start the coital play.

Bust out the emergency stash of lubrication, and as the winds pick up, with enough stimulus and rampant lawlessness, your hurricane plans will include a simple trick that makes the howling winds only add to the screaming orgasm that results in a creaking foundation to combat boredom.

Typically, people might say that going to the local supermarket might be a place to find someone to hook up with, but as the local media could point out, most stores are not open. Stay up on the donation centers on the local news because if you’re in south Florida, that’s where people are flocking to, many of them lonely with too much time on their hands.

Why complain about standing in line when you could be eyeing who to hook up with there?

This is not the time to sit at home and cry alone. Offer to help anyone; you never know who they might know who is also single and ready to mingle. Just put it out there.

I’m so lonely. I got divorced. I’m single or whatever your story, tell it to others.

More than likely, they have a story, too, or they have a friend with a story. If that friend is nearby, you offer to help that friend, become a hero, and score. Nothing is sexier than someone willing to lend a helping hand in a time of need, doesn’t matter what you do, how much money you have, or anything, so long as you are there helping in the time of need.

It’s like when a person is broken down with a flat tire on the side of the road. If you can help, that person is grateful. That’s the classic way to start a legit long-term hookup.

It can be as simple as picking up twigs in the yard or as massive as getting a tree off their house. Maybe it’s simply offering water or ice to someone, even if you know they don’t need it. Sometimes, the simple act of offering is enough of an in to get to the bedroom and score.

Double score if you are an emergency responder. Many people have fantasies about being rescued, especially by people in uniform. If you have uniforms to throw on, strut around, chat it up with people, and you’re more than halfway to a hookup just by wearing the right outfit.

That being said, all those National Guards out there, looking hot and sweaty in the Florida sun, go flirt with them, too. Most of them are trying to keep a smile on their face, so give them a reason to grin by throwing out your cheesiest pickup lines to see if it can reel them in.

What’s the worst-case scenario? What if it works for your hurricane hookup?

While it might be weird to see the military personnel handing out freebies like water, food, ice, and tarps to people at the same place where a little more than a month ago, we were cheering on baseball games, it’s even more disturbing to see the place shredded with heaps of aluminum cleared enough for the traffic to pass.

Get over the change in the scenery, knowing that the Tampa Bay Rays baseball stadium has been the spot of many people meeting and hooking up over the years, so why not give a smile and wink to that person in uniform with a pickup line?

Show how grateful you are. Offer to service the service people. That’s giving back.

At least, I think so. Others may or may not agree. Does it matter?

Live out your fantasy, whatever that may be. You survived the hurricane. Now, it’s time to celebrate with a bit of recovery effort style of hurricane sex for ultimate hurricane pleasure.